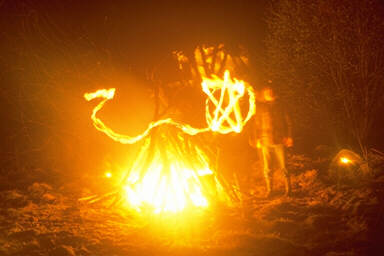 This is a dangerous night. A time of unbridled joy, a mirror of our dreams and nightmares. Older than the church, older than christianity. According to legend it is a night where the borders between the visible and hidden world, is weakened and sometimes disappear. It exists a shadow world close to the day world we know. A mirror image - mystical, wonderful, exciting and terrifying. Yes, we know this world intimately.

Not in our civilized part, the part of us that is always sleeping - and dying. The modern world is the fake, the "illusion". What the imagined masters call the physical reality. Little pegs and boxes to fit their concept of reality. Fortunately, life is so much more interesting than this bleak image of it. This nightmare that fail in every way to excite us.

We're so specialized these days that we cannot see the big picture. You can never extract, deny a part of life and not lessening life itself. There is no Shadow World, there is no Real World. Everything is a whole. People of the modern day Earth choose one tiny part of that whole and claim it to be The Whole. Like a stake in the gold rush, a property on a piece of land, guarded by fences and dog - like guards. Like the land, The Earth or reality, can be owned.

Yes, a part of us has always known the world. The part deeper than any civilization, any technology, beyond the first farm, the first city. It is the place we can sense with our ears, eyes, tongue, nose and skin. It's the place we can sense without any of these senses. The one we're in contact with when we sleep and not - sleep. A world of dream and not - dream, where life and death are one. Like human and animal, nature and human. It's life. In its unmodified form. 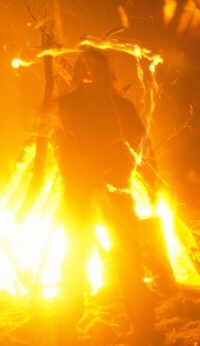 The old knowledge may have been split in three...

All these bearers of knowledge were witches. Boys or girls, women or men. All of them could work at the same time. Or single or more. They could be many, they could be one. The Old Knowledge realized willingly that everybody has something to contribute. All kinds of contributions, "small" or "big". All kinds of people, young as old, calm as restless as wild, the ones with their own, unique approach and they who were a part of the majority. Everybody.

Witch is an old word that christianity gave a bad reputation. The old english word is supposed to have meant "wise" - wise man/woman. Bearer of Knowledge. It meant they were healers, they lead ceremonies and were first in the search for new, alternative insight.

Magic is nothing foreign or strange. It's just a way of life, a way of looking at the world and our surroundings, like christianity, science and other religions. But Magic is much closer to nature, much closer the rhythm of being, the sources of life.

Under The Burning Court (The Holy Inquisition) most of the "followers" of the old ways, together with many others "innocents", were burned at the stake. The victims of these atrocities, one kind of many, done by the followers of The One God, were tortured until they "confessed" their "guilt". In the rare occasions a confession were impossible to obtain, the accused witches were burned anyway, as a test. If the one on trial survived, the person concerned was a witch... and guilty as hell. If not, it didn't matter. The lucky innocent stiff would go to Heaven and get his or hers just reward. 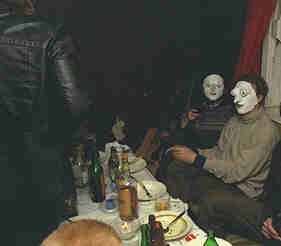 According to christian lore, this is a night when the witches fly on their brooms to Blacksburg. They gather there and sell their soul to Satan. Every enlightened member of the human race know that this can't be. Satan doesn't exist. No more than god does. This error, this desecration of the human heart, has continued for years without number. This is a dangerous night... Its very existence poses a threat to the masters, with their chains and their prisons. It makes us remember.

We are natural nomads. That fact doesn't mean we can't also be other things. But this is our core. We can never settle down and will always be restless and downright nasty, when forced to live in one single place. No matter how tempting the cage is. And it isn't. Not at all!

The word "primitive" is almost always uttered in a negative context. It evokes images of apes and wild, fierce animals roaming the herd. But we are apes and animals. and we sure are fierce and wild. I see nothing wrong with this reasoning. None at all. It is fire and ice, heaven and hell and everything in-between. But it frightens us, brings forth the memories, sweet and terrifying, we are brainwashed to forget. Primitive is something we have put behind us, that rises to haunt us now and then. Too many now and then. Animal is something lower than human. We are its superior and as it should be remembered; we were ordered by god to multiply and rule The Earth. This mindset, this developed brainwashing is necessary to uphold our proud and superior society.

It doesn't work, though. And we rejoice.

Humanity has attempted to leave the wilderness, but the wilderness has never left Humanity. The cities were supposed to be our hiding place, our fortress, against the jungle, the wet and moist places, the unbridled lust of the beast. But humanity has shown itself to be far more dangerous to itself than the nature we found so ruthless, so undeniable cruel. There is no escape. As the old saying goes: We can run but we can't hide. Not from ourselves. Wherever we hide we'll be easy to find. Push down a lid on a steaming kettle and the pressure will just increase. The pressure has increased for so very long now and everything is set. Everything and everyone is about to blow. 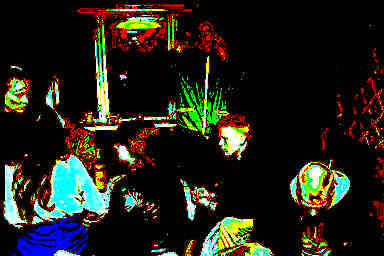 Back to Midnight Fire Homepage