from Winter Night by Amos Keppler
331. night 12051 - The first year in the time of The Crimson Tide 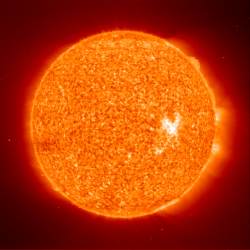 The New Years Eve is as we all know or should know, December 21st...

The sun feast has been celebrated for a long time, far back in ancient, "pre - historic" times. Only recently did the christians move it and divided it into two, made it lose its teeth. They sucked all the life, all the juice out of the celebration, and transformed it into a stale, harmless "event". Yes, religion is once more guilty as charged.

What is celebrated, in addition to life itself, should be quite obvious really.

It is most and foremost reneval. Our unbrakeable link to nature and how we, like our home, is reborn from the ashes. The blood and fire inside. Three cheers is cried from sore throats and is nine times gone to rise. On the soft carpet, full of thorns. Over the hill.

He comes from the night shadows, at his strongest this time of the cycle, to bring gifts to those who themselves walk the shadows. It’s nothing physical, nothing that may be touched or moved, but it is tangible. Nowadays this Bringer of precious gifts is «reduced» to a ridiculous old man with long, white beard. Modern man put names on the unknown to make it known. It has not, does not, will never work. The modern approach is to seek knowledge only in the broad light of day. Thus, those who mistakenly call themselves seekers and shamefully abhor all others, reduce and limit and hide themselves, do their very best to get others to hide, too. They know this, but they can never admit it. Not even to themselves. And thus humanity limp on shaky crutches, which most horribly fail and do so at the edge of the cliff.
He comes on this longest night, bearing gifts of knowledge and realization, discovery of self. Self - discovery, Imaginary, but not an illusion. One shadow at the edge of consciousness. You can't see him, can't hear him, but he's there! Throwing seeds, strengtening curiousity, if curiousity is present. He comes to those gathered around the fire, because they seek him, or someone like him. They seek their own center, they seek themselves. Pieces of it through eternity. This is the human being walking the shadows on New Years Eve...

Not father christmas, not santa clause or some of the other imbeciles we keep hearing and cannot avoid hearing about.

Back to Midnight Fire ARENA