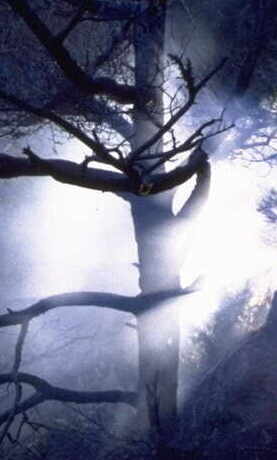 This is a short story cut long.

FIRE BURNING IN THE WIND

Go to Chapter One

In the end it was hunger, survival instinct, that drove her on her feet, made her move, away from there, into the frenzy of the Hunt. She hunted for a while, but even if she did manage to kill a game, it was a clumsy and sad kill. Not soon afterwards, she found herself back on her spot at the edge of the forest, keeping virtually her complete attention on the dark skinned boy. She stayed careful, though. No sound came from her. Light did not reflect from her surface. A person glimpsing her shape would be wondering, if she existed at all. She smiled longingly and drew to her the young male’s every move and gesture. She sat still without moving, and time just went away.
Then... something abruptly changed. Bewildered she felt moisture when touching herself and couldn’t stop a moan from being released from her suddenly paper dry throat, between lips she could no more keep pressed together. She looked down between her wet thighs, looked at him - and understood. The girl remembered, without that being necessary to understand. He needed her, too. Male and female needed each other.

On the FIREWIND main page you'll find other stories.

Yes, there is a Human Beings inside that inferno...